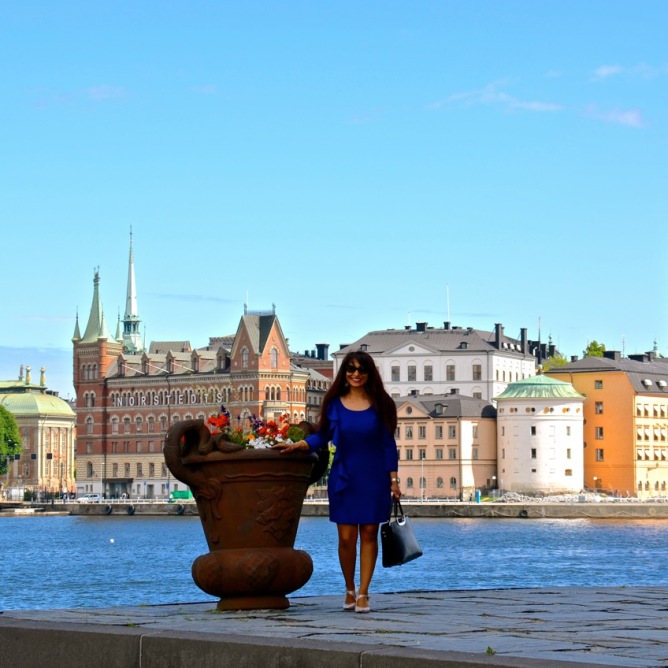 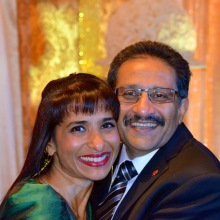 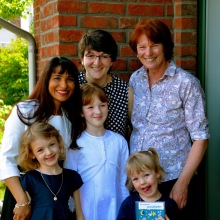 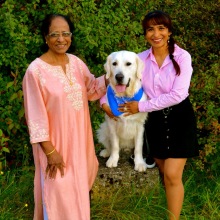 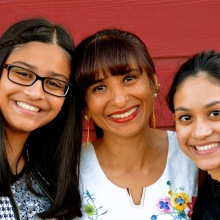 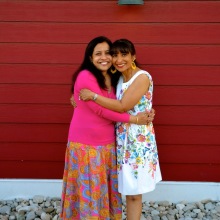 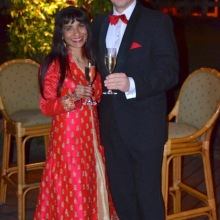 We celebrated our silver anniversary with dear friends in Stockholm three weeks ago and the day could not have been more beautiful. It was a day filled with hope and the promise of new beginnings surrounded by a protective circle of warmth and love.

Which made it even harder that exactly four days later I got hit by very high fever with temperatures around 40C/104F out of the blue. What we thought was a bad bout of 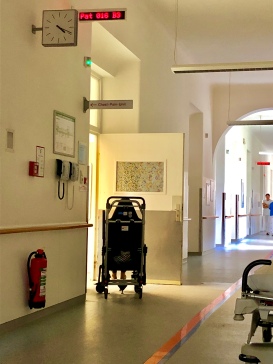 summer flu developed into an infection that appeared to have hit the left side of my face/head giving me a splitting headache and making it impossible for me to do anything but lie down. I spent nearly an entire day in ER hanging on a drip with very unfriendly doctors and nurses, throwing up and incapable of even walking a few steps, where all I wanted was to give up . A week later an MRI that our family doctor insisted on getting done revealed a severe head infection which was not visible externally and if not treated immediately would lead to meningitis or even a stroke.
Heavy antibiotics and cortisone sprays finally managed to get the infection under control and it is nearly gone now. I am still on medication to get the rest out and feeling much better. Normally I am someone who has a very strong will and gets back on her feet very quickly after any illness. However this time the strong will is not helping much and our family doctor gently reminds me every now and then that the body will take time to get over this severe infection.
I have never been so sick and bedridden for such a long time. But I have also had time to reflect on a number of things – some of which gave me the strength to get back on my feet.

I am grateful for the wonderful and dear friends that I have – friends who are there both in the good and the difficult times. Friends who send encouraging messages, 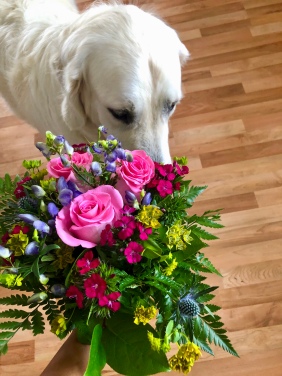 who make me laugh or smile and who seem to know just what I need to make me feel better. I have experienced yet again that messages can have either a very powerful healing effect or a very destructive one. And I am grateful for all the loving, encouraging messages that I received and that helped me to get through these past two and a half weeks. I am grateful these friends understand that I do things differently e.g. that I am back on a business trip just two days after not being able to leave my bed. They do not call me stubborn or thickheaded but support my efforts to get back on my feet even if these efforts prove to have been a bit too early. They do not say “I told you so” if I have a relapse but are encouraging and supportive.

I am grateful for a family doctor who even paid me a house visit on a Sunday evening at 9pm because we called her since I was in a very bad shape.  She is our GP since over ten years and even though we know her to be a very competent and professional person, we saw a side of her during the past weeks that touched us deeply. On the day when she
called the ambulance to take me to ER (I had been to her for a checkup and sort of collapsed in her office), I saw a very caring and loving side to her and her assistant. The loving care and genuine concern that I experienced in her office was a sharp contrast to the heartlessness and indifference that I experienced in the ER of a very well known hospital in one of the posher areas of Munich! And I am very grateful that she followed her gut feeling and insisted on an MRI although the ER thought that I only had an adverse reaction to the antibiotics (they also refused to do a CT scan which the neurologist had 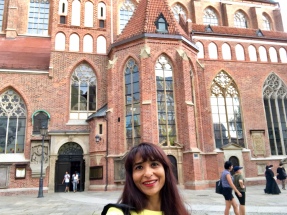 recommended but that is a different story..). Interestingly she had already started me on the antibiotics before the MRI because of a hunch she had which I am convinced prevented me from having a stroke and/or prevented the infection from spreading to the brain (I had been having high fever for over 5 days before the MRI was finally taken and showed the severity of the infection). Had we listened to the diagnosis of the ER doctors, it might have been too late. 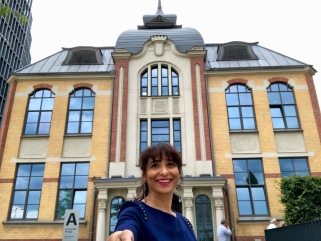 I am grateful that after the most critical period was past, she let me set the pace to recovery which meant that I was back to business travel much earlier than others might have been. I am grateful that she equipped me the best she could to do these trips and explained to me when I should abort the trip. In other words, I am grateful that she treats me like a competent and mature adult who needs to test herself to find out how I feel but she ensured that there was a safety net to pick me up if I fall.
And I am grateful for the heavy antibiotics that curbed the infection so quickly and killed a major part of it even if I am still struggling with the side effects.

I am grateful that I not only have an interesting job that I enjoy but that I have a wonderful manager (yet again!) and colleagues who not only filled in for me but who also encouraged me to take my time to heal. So even though I often struggle with the anonymity and bureaucracy of the huge company that I work for, I am very grateful for the tremendous support that I have from the team I work with. And I am very grateful for colleagues from the teams that I worked with before who reached out to me with encouraging and uplifting messages. I am grateful that they do not expect me to go online when I am sick but are appreciative when I do since they understand that I need to do something other than just lie in bed and sleep. I am grateful that they understand this helps me to heal even though they would not do it themselves. 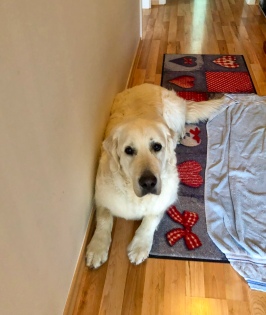 I am grateful for Jaden who has been worried and very clingy these past weeks. Bernd had to hold his paw when our GP came home that Sunday night and was examining me. He still gets very worried when I tell him that I am going to the doctor for a checkup. I am convinced that he knows how sick I have been and is worried I might be sent off to the ER from the doctors office again. And even if it means that he is sleeping in our bedroom more often nowadays and keeps me awake with his moaning and throwing himself around (he is a very noisy sleeper). I am grateful that when I start coughing in the middle of the night, he is at my bedside panting heavily and blowing hot air on my face. On a side note I do believe he enjoyed the fact that I did not make him get up early for a morning walk since I was sick :).

And I am very grateful for Bernd who has been a tremendous support these past weeks. It is very rare that I come to the point where I admit that I cannot fight for 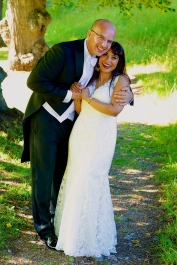 myself any more but I reached that point in the ER. And I am grateful that he was there to take on that fight and is taking on other battles for me, battles that I have fought for over three years and had no success in, that have emotionally hurt and harmed me tremendously. This means of course that he has to bear the
brunt of some very hurtful comments because he has stepped in to put a stop to behaviour that was damaging me very badly.
And I know that since he is now stepping in to protect me, he might be defamed and attacked for it.
When we renewed our vows three weeks ago, we did not think that they would be put to the test so soon. I am grateful that Bernd has been there for me – both emotionally and physically these past weeks. When I decided that I wanted to try to travel last week, he planned his business trip in such a way that his flight took off a few minutes before mine. He knew I 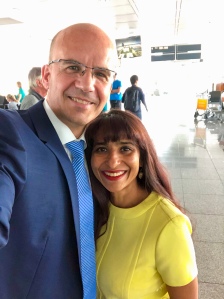 was nervous and unsure about the trip so he made sure that he was there to support me as much as he could. He understands that sometimes what I need is someone to support me part of the way if they cannot be with me all the way. I know that it was not easy for him to let me travel so soon because he of all people knew how weak I was. I am grateful that he gives me the space and freedom to try things out and does not smother me with his love and concern.

The past weeks were quite a scare since this sickness came out of the blue and knocked me out so badly – both physically and emotionally. But I am grateful that in all this God has a good plan for me. My sickness has shown me things even more clearly and continued to confirm the path He has put me on. I am grateful that He has healed me so far and I trust that He will continue to heal me and bring me back quickly on my feet. Now I just need to have patience with myself, test my limits and let Jaden know that early morning walks are “in” again. 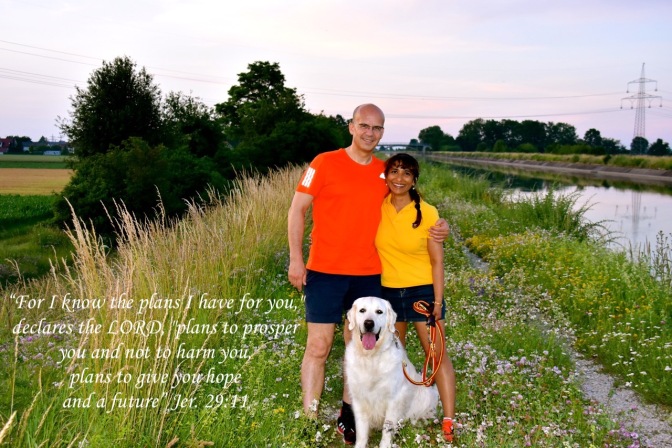 One thought on “A grateful heart”